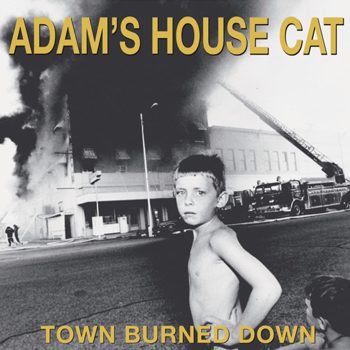 Mike Cooley and Patterson Hood of Drive-By Truckers formed Adam’s House Cat in the Muscles Shoals area of Alabama in 1985. Their songs and friendship became the foundation on which DBT was built.

Their one and only “lost” album from 1990 was remixed by David Barbe, mastered by Greg Calbi and is now available for the first time with archival photos and extensive liner notes from Patterson Hood.

Tired of living in Buttholeville
Tired of my job and my wife Lucille
Tired of my kids Ronnie and Neil
Tired of my 68 Bonneville
Working down at Billy Bob's Bar and Grill
The food here tastes like the way I feel
There's a girl on the dance floor dressed to kill
She's the best looking woman in Buttholeville
One day I'm gonna get out of Buttholeville
Gonna reach right in, gonna grab the till
Buy a brand new hat and buy a Coupe deVille
Lay a patch on the road that runs over the hill
There's a beach somewhere where the waters are still
Gonna lay in the sun till my lily-white skin peels
Drinking the best scotch whiskey, eating lobster and eel
and I'm never going back to Buttholeville
Never going, never going, never going never going back!
All Lyrics by Patterson Hood / Music by Adam’s House Cat

Driving all alone past cemeteries in the country
Soybeans and power lines, curves and morning fog
Standing in the church a cappella songs of mourning
Rise above as tears are falling
The family’s somber calls of “why”
I am just a new boy in this family full of grief
Maintaining somber postures in this time of disbelief
Driving in the lineup headlights on and all along
To another cemetery in the middle of the road
Tears in her eyes she said
“The worst is yet to come
With one third already gone
And two thirds left to succumb
To roads with a bridge out or to lightning from the sky
There’s so many ways to die
And no one can tell me why”
"Why you standing there boy
With your fancy suit and tie
Can’t you tell we’re dressed in black
She ain’t never coming back"
As they lowered down her body into the cold and somber ground
I turn around and realize they’re looking up, I’m looking down
Faith will never leave you when it’s all you’re clinging to
But it’s a time of much distractions
I’m standing all alone
Lying in the cemetery
Names and dates and flowers
Grass so freshly mown
Angels made of stone
Cars may pass on by me now
Some may even stop
To bring me plastic flowers
To look at me and ask themselves
Ask themselves why
Ask yourself
Why
(Patterson Hood/AHC) 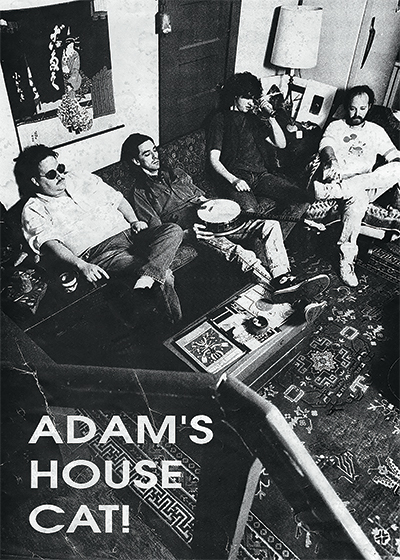 Drive-By Truckers have announced the long awaited arrival of TOWN BURNED DOWN, the first-ever official release from singer/songwriter/guitarists Mike Cooley and Patterson Hood’s original incarnation as Adam’s House Cat. Recorded in 1990 but never before released as intended, the album arrives at all DSPs and streaming services via ATO Records on Friday, TK.

While Mike Cooley and Patterson Hood may have founded Drive-By Truckers in 1996, the two musicians had in fact first come together more than a decade prior. They met on August 1, 1985, the day Hood moved into a dank basement apartment in North Florence, AL shared by Cooley. The two young musicians took notice of each other’s guitars and became fast friends, drinking cheap beer and singing songs together on the flat’s shabby couch. Among those songs were originals penned by Hood, including one that took its title from the Southern colloquialism, I wouldn’t know him from Adam’s house cat. Hood and Cooley worked out a rendition of the song that quickly led to another and then another. That first collaboration eventually gave the band its moniker – Adam’s House Cat was born.

Adam’s House Cat proved rebellious from the jump, the only young band in the Muscle Shoals region playing hard rocking original music. Despite the area’s long musical tradition and legendary studio scene – including of course FAME Studios and Muscle Shoals Sound, the latter co-founded by Hood’s dad, session bassist extraordinaire David Hood – times had changed in Muscle Shoals. No matter the cause, be it a downturned local economy or a record industry shift towards studios in Nashville and Los Angeles, the Muscle Shoals live scene in the mid-1980s was now limited to Top 40 cover bands and country and western, more likely a bit of both.

Undeterred, Hood and Cooley enlisted drummer Chuck Tremblay, more than a decade their senior but a gifted musician who after years toiling in motel lounge combos had his own personal commitment to only playing original music. A series of bass players did short time with the band before the arrival of John Cahoon, son of the mayor of Tuscumbia, AL and more importantly, a rebellious, rock-solid bassist.

Beginning in 1987, Adam’s House Cat spent three years grinding it out in bars and clubs around their home region, from Birmingham and Huntsville to Nashville, Memphis, and Oxford, MI. Wider attention came when the band’s infectious “Smiling At Girls” was named one of 10 First Place winners (out of over 1500 entries) in MUSICIAN Magazine’s Best Unsigned Band Contest, judged by an all-star panel that included Elvis Costello, T-Bone Burnett, Mitchell Froom, and Mark Knopfler. The track was featured on a nationally distributed compilation CD, garnering interest from an array of labels and managers across the South.

Despite hard touring around the Southeast, no deals came of Adam’s House Cat’s first success. The band took matters into their own hands, recording a collection of original train songs on four-track cassette dubbed TRAINS OF THOUGHT. Songs like “6 O’ Clock Train” and “Buttholeville” reflected the band’s frustration with their home region, a profound dissatisfaction that often enraged local audiences, occasionally to the point of incipient violence.

On November 25, 1990, Adam’s House Cat set up in the rooms upstairs from Muscle Shoals Sound Recording Studio and recorded basic tracks for fifteen songs with producer/engineer Steve Melton (Lynyrd Skynyrd, Bob Seger and the Silver Bullet Band, Traffic). Tracked live on 2’’ analog 24-track tape, the songs recorded that freezing cold day represent an historic document of Adam’s House Cat in all their electrifying, unwieldy glory. The cavernous studio’s plaster walls, hardwood floors, and 25-foot ceilings enabled the band them to create a massive sound without using the digital reverb common in that that era. As a result, the recordings – mostly first and second takes – capture Adam’s House Cat as they truly were, loud, passionate and bracingly determined. 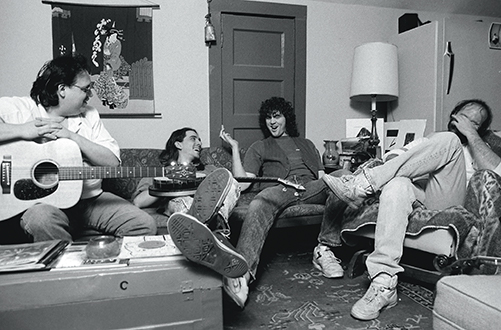 1991 saw Adam’s House Cat struggling to both fund their album’s completion and simply stay together. Hood tracked his lead vocals in on the same January night in which George H.W. Bush began Operation Desert Storm. Backing vocals and minimal overdubs were added that winter and though Hood was not entirely thrilled with his vocal performances, by spring, Melton had begun mixing the raw recordings. Cahoon abruptly left the band mid-summer, replaced by Chris Quillen, who eventually contributed a memorable high harmony vocal to the album’s “Long Time Ago.”

Alas, Adam’s House Cat’s days were numbered. Hood and Cooley relocated to Memphis in early September and though their live shows that month proved among the band’s best ever, by month’s end, the band had played its last, quietly breaking up after an uneventful gig in Nashville. TOWN BURNED DOWN not only went unreleased, the original 24-track tapes were lost after Muscle Shoals Sound was sold and liquidated. As if that weren’t bad enough, Melton’s mixes were boxed up and sent to Jackson, MS’s Malaco Studio where they were later destroyed when a devastating tornado struck the historic building in 2011.

Hood and Cooley carried on, collaborating on a couple of ill-fated projects, but in 1993, the two had a falling out that lasted until Hood relocated to Athens, GA in April the following year. Their musical partnership resumed, with Hood making monthly visits to Cooley’s Birmingham apartment to record four-track demos together. With Cooley now also writing original songs, a new vision began to take shape. Hood and Cooley intended Chris Quillen to be a founding member but the bassist was tragically killed in a car accident that May, mere weeks before Drive-By Truckers officially came into being. John Cahoon passed away in 1999.

Fast-forward more than twenty years in which Drive-By Truckers grew to become what Stereogum hailed as “perhaps the greatest extant American rock and roll band,” equally acclaimed for their landmark 11 LP canon as well as their epic live performances. In YEAR TK, three boxes labeled “ADAM’S HOUSE CAT” mysteriously appeared in the tape vault of longtime friend and DBT producer David Barbe’s Athens, GA studio. Contained within were the unmixed 2’’ tape master tapes of TOWN BURNED DOWN, along with another reel containing an EP’s worth of songs recorded the previous year.

Partly inspired by Chuck Tremblay’s near fatal heart attack in the spring of 2017, Hood made a New Year’s resolution to finally complete TOWN BURNED DOWN and in February 2018, Barbe baked the fragile tapes and placed them on reels for the first time in more than a quarter century.

Though the music and material were as powerful as ever, perhaps even more so, Hood remained as unhappy with his vocal performance as he had been in the past. Wondering if his hard-earned abilities would allow him to finally sing his songs as originally intended, Hood decided to attempt new vocal tracks. Within two hours, vocals were recorded for the entire album, raw and cathartic takes that were at once true to Hood’s original intent but reflecting the lessons of the intervening years.

On April 16, 2016, Hood, Cooley, and Tremblay convened at Barbe’s Chase Park Transduction studio in Athens to complete mixing TOWN BURNED DOWN – the first reunion of the Adam’s House Cat founding members in more than 27 years. The final mixes were later mastered at Sterling Sound in Edgewater, NJ by longtime DBT collaborator Greg Calbi.

TOWN BURNED DOWN can at last be properly heard the way Adam’s House Cat always wanted it to be heard, its raw soul and boisterous enthusiasm already hinting at what was yet to come. Songs like “Runaway Train” and “Cemeteries” display dark edges that surely must’ve intimated audiences in their time but now sound startlingly heartfelt and full of fiery joy, energized by Cahoon and Tremblay’s versatile, dynamic backing and of course, the ever-present, undeniable chemistry between Patterson Hood and Mike Cooley.

Nearly three decades later, Muscle Shoals is once again an important American musical scene boasting countless new bands and young artists who proudly attest their deep roots in the community and its culture. Though few have actually heard their music, Adam’s House Cat has long loomed large as both groundbreaking innovators and the missing link between Muscle Shoals’ celebrated then and vibrant now.

“Finally releasing TOWN BURNED DOWN brings a sort of closure to one of the saddest and most important chapters of mine and Cooley’s lives,” writes Hood in the LP’s detailed liner notes. “The years we spent pounding out these songs made us the people and artists that we have later become but we carried with us a darkness from never having been able to get the album out. The sound of these songs blasting out of the control room after all of these years while Cooley, Chuck and I grinned from ear to ear has truly been one of the most joyous events of my entire life. Songs from literally half of my life ago that somehow still seem vital to me all of these years later.”

New lead vocals and mixes made at Chase Park Transduction Studios in Athens, Georgia. No modifications were made whatsoever in the original instrumental tracks of the album. All new lead vocals were done in a couple of hours, mostly 1-2 takes each on February 12, 2018. Mixes by David Barbe on April 16 – 18, 2018.